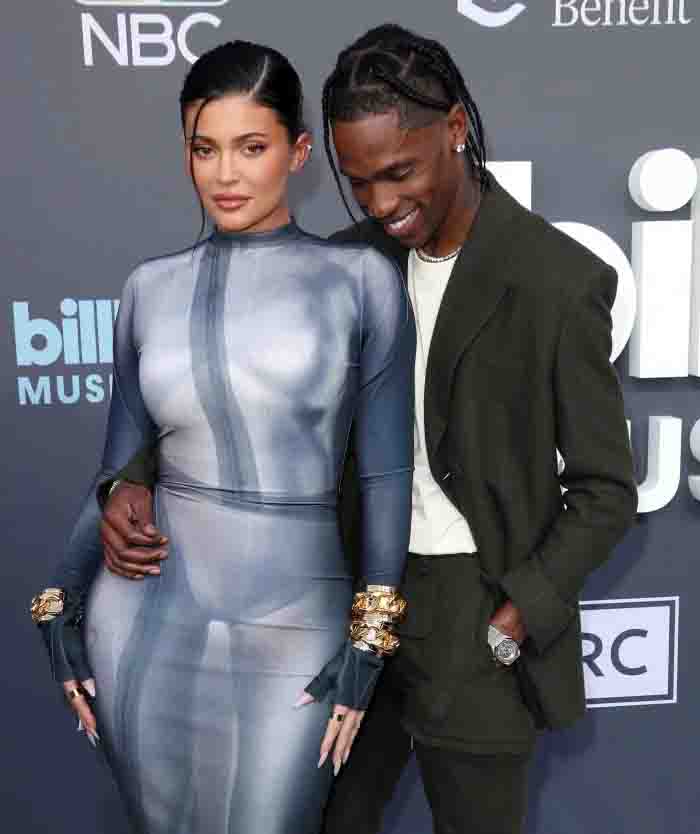 Feeling content. Kylie Jenner and Travis Scott are “super private” when it comes to the idea of getting engaged, a source exclusively reveals in the new issue of Us Weekly.

The Kardashians star, 24, and the rapper, 31, have “swerved the topic for years,” the insider says, noting the couple have “not ruled it out.”

The duo welcomed their first child, daughter Stormi, in February 2018. Four years later, they expanded their family again when their son was born on February 2.

“The priority has been about taking care of the kids,” the source tells Us. “Keeping things between themselves calm and chilled and setting up boundaries that will give them the best chance of staying together in the long term.”

The Kylie Cosmetics founder, who has been on and off with Scott since 2017, “goes back and forth about engagement and marriage,” the insider says, noting, “She does like her independence but can’t imagine herself long term with anyone other than Travis.”

No matter what the pair’s romantic status has been over the years, both parents have been “very hands on” with their children, per the source.

The makeup mogul and the “Sicko Mode” artist, however, “count themselves lucky to have a lot of help at their disposal” when it comes to raising their family, the insider adds. That extra assistance gives the twosome “time for date nights” and the ability to “enjoy their space when they need it,” the source explains.

Jenner and Scott are “happy and chill right now” with where their relationship stands, the source tells Us. “It’s all good.”

The Keeping Up With the Kardashians  alum went public with her and Scott’s romance in April 2017. The pair’s relationship appeared to grow stronger after they became parents the following year. In October 2019, Us confirmed that the duo was taking a break. At the time, a source revealed, “Kylie still loves Travis and this isn’t considered a full breakup to either of them.”

The twosome sparked reconciliation speculation on multiple occasions in the years that followed. News broke in August 2021 that the on-off couple were expecting baby No. 2, just three months after they were seen getting cozy in Miami. The reality star and the Texas native have since attended multiple events as an item.

Jenner seemingly confirmed the pair’s relationship status in April when she wished her “love” and “best friend,” Scott, a happy birthday via social media.

Watch the exclusive video above, and for more about Jenner and Scott’s dynamic, pick up the latest issue of Us Weekly, on newsstands now.