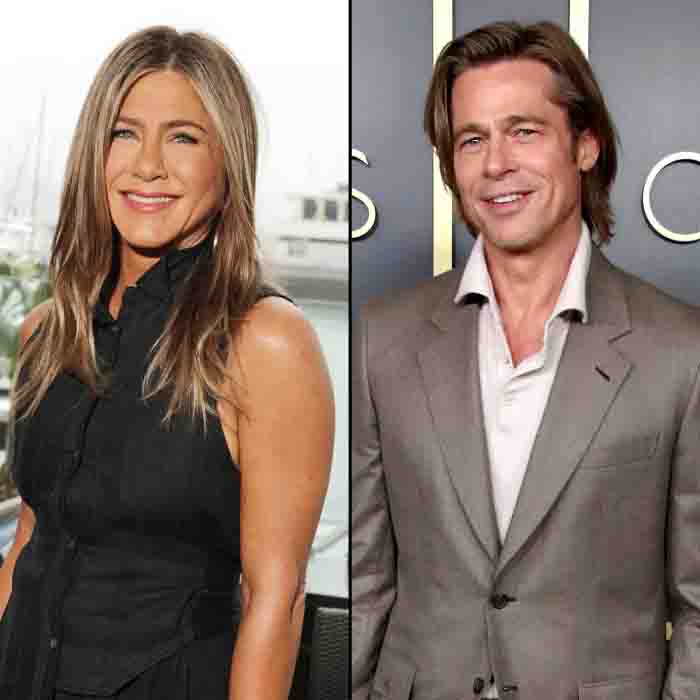 Looking back with a laugh! Jennifer Aniston cracked a joke about her divorce from Brad Pitt while discussing the aftermath of the Friends finale.

Everything Jen Aniston and Brad Pitt Have Said About Their Relationship, Divorce

When the Horrible Bosses star, 53, made her final appearance on The Ellen DeGeneres Show on Thursday, May 26, host Ellen DeGeneres asked her how she coped with the end of the long-running sitcom, which aired from September 1994 to May 2004.

“I got a divorce and went into therapy,” the Morning Show actress quipped. “And then I did a movie called The Break-Up. I just kind of leaned in to the end.”

Less than one year after the Friends series finale, Aniston and Pitt, 58, announced their split after four years of marriage. The duo, who started dating in 1998, had tied the knot in July 2000.

Brad Pitt and Jennifer Aniston: The Way They Were

After their breakup, the Oscar winner went public with Angelina Jolie, whom he met on the set of Mr. and Mrs. Smith while he was still married to Aniston. The Fight Club actor and the Maleficent star, 46, tied the knot in 2014 after nine years together but later split after two years of marriage.

Aniston, for her part, laughed about the drama during her Ellen appearance. “I just was like, ‘You know what, guys? Let’s make this a completely new chapter,’” the Friends With Money star joked to the comedian, 64. “Let’s end everything and then start new. It worked great!”

Though the pair’s split made plenty of headlines at the time, they’ve remained amicable with each other over the years. “Brad and I are buddies,” Aniston said during a June 2021 appearance on The Howard Stern Show. “We’re friends. And we speak, and there’s no oddness at all.”

Fans of the twosome clamored for a reunion after they were spotted hugging backstage at the 2020 Screen Actors Guild Awards, but an insider told Us Weekly at the time that it isn’t going to happen.

“There’s nothing romantic going on between Brad and Jen,” the source explained in February 2020. “They actually think it’s hysterical that fans are so obsessed with them getting back together.”

Interest in their relationship status hit another high in September 2020 when the pair appeared in a virtual live table read of Fast Times at Ridgemont High, with Aniston playing Pitt’s character’s crush. “Everyone, including Brad and Jen, had a really good time doing the reading of Fast Times at Ridgemont High and were happy to reunite,” an insider told Us at the time.

After their split, Aniston dated Vince Vaughn and John Mayer before she began her romance with Justin Theroux in 2011. The pair, who tied the knot in August 2015, called it quits in February 2018.

Despite the end of their romance, however, the Cake star and the Leftovers alum, 50, also remain close. “Like it or not, we didn’t have that dramatic split, and we love each other,” Theroux told Esquire in April 2021. “I’m sincere when I say that I cherish our friendship. We can not be together and still bring each other joy and friendship.”

The Mulholland Drive actor has also said he wouldn’t say no to a role on his ex-wife’s Apple TV+ series, The Morning Show. “Listen, if they wanna send me some pages,” he told Entertainment Tonight in March 2021, adding that he speaks to Aniston fairly often. “We check in.”